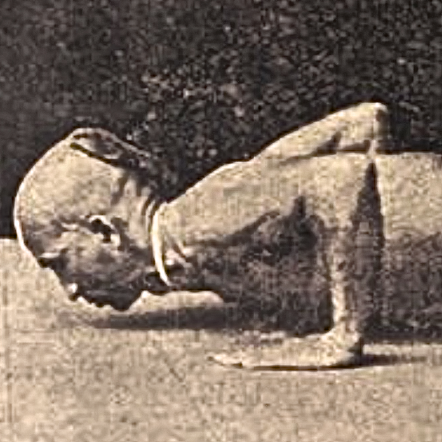 Chaturanga Dandansana or ‘Chatuary’ as we call it in the Ashtanga Yoga tradition, is a difficult and somewhat disheartening posture. A quite high state of strength is required to support it and and even more pronounced strength to utilize it well. Chaturanga furthermore tends to mess around a bit with our minds as it is not a ‘real’ asana but a transitory movement which we often cease to recognize the importance of in stream of on-going other activities, dogmas and ‘must-dos’ in our practice. And as it feels like unforgivingly hard work to find a minimum of proficiency in it, we often simply peruse by it until sheer necessity calls upon our undivided attention, such as strain or injury.

Yet, no matter which level of practice we attend to, Primary, Intermediate or Advanced, we move through Chaturanga Dandasana repeatedly and at some moment we owe it to ourselves to take the time it takes to embody the process of defining its reality in our physical and mental body. This intends to be a platform upon which your exploration can begin.

First of all, be warned of the possible demotivating effect of the technical and anatomical complexities below! Do not let these technicalities lower your spirit or inquiry of one main reason: The technical information needed to convey Chaturanga Dandasana becomes heavy and hi-tech when described in writing, as the media of writing simply lacks the naturalness which the kinestetic experience provides so instantly. As a matter of fact that is probably why we are taught yoga in a direct in- terchange between a knowledgable, experienced teacher and a devoted student. In unfolding the Yoga Darshana, there is simply no other media which compares. True learning and transmission is almost exclusive to the personal one-on-one setting whether asana, yogic thought, chanting or what-not and in my opinion any other learning device is a substitute for the real experience which is to be sought to the furthest possible extend. Any how, here we go!

The first thing you need to acknowledge is that when our bodies evolved from four-legged to two-legged our joints, bones and muscles went through a similar transformation. Our arms became tools for detailed articulation while our legs re-designed for weight bearing. The monkey state of using our feet as hands and hands as feet has since been divided and specialized to perform specific tasks with our feet and hands respectively. Therefore we no longer has the proper skeletal construction to support extensive weight bearing on our arms. Now, that doesn’t mean we cannot do it, but it requires our conscious muscular engagement to do it for sustained period of time without causing harm. Summa, strong conscious muscular activity is a must to do Chaturanga Dandanasana without unwanted side effects.

Chaturanga Dandanasana takes different forms depending on what you aim to achieve with it. In general Chaturanga issues are 99% of the time related to the difficulty of stabilizing the upper body with the lower body sufficiently so my response will be concerned with that. I would say there are two main options which both carry positive effects and minimizes strain to your body while working on the greater scheme of the yogic paradigm.

#1: If your objective is to lighten the pressure’n’pull off tired or strained Acromio Clavicular Ligament (illustration 1a) which is a common yet undesired side effect in the Ashtanga practice, then you want to engage strongly into a particular muscular pattern in your upper body: Engage your upper and mid Romboids (illustration 2a) to move your shoulder blades closer to your midline/spine (no squeezing though!). This will stabilize your shoulder blades and therefore your upper arm bones (Humerus) which attaches to the shoulder blades. By doing so you have created foundation for Serratus Anterior (illustration 2d) to engage in an efficient fashion as it attaches on the inside of your shoulder blades. Now, engage Serratus Anterior and Latissimus Dorsi at the same time by lowering your shoulders towards your waist/hips to settle your shoulders into a firm stabilization, while allowing your sternum to raise a good bit forward, hence finding yourself in a pose with a sensation or slight Thoracic spine extension. By doing so you have provided a firm and engaged muscular ‘saddle’ for your shoulder girdle to articulate in, which gives you the proper and necessary muscular support to carry most of your body weight on the minor skeletal joints which connects your arms to your torso. That will allow you to give some rest to your over-used Acromio Clavicular Ligaments while building new strength patterns beneficial for many other asanas and movement mechanics than Chaturanga itself, such as handstands, Up- Dog, Down-Dog, Jump-Thrus, Dhanurasana, just to mention a few.

To integrate this pattern takes time, dedication and practice. It requires an intensity of commitment which is commonly only found in the devoted practitioner forced to redirect his/her attention by dire necessity, such as ex. an injury obstructing from pursuing his/her beloved Sadhana!

#2: Now, if your objective is less strain based and more concerned with avoiding strain or sim- ply wanting to build your Chaturanga well, I would commence with version #1 for a good 3-6 months before starting this next step to connect the mus- cular patterning described above into your mid torso and pelvic area. To do so you need to engage your lower, frontal ribs into your body, kind of like as if you were contracting your Thoracic Diaphragm while allowing more space between your shoulder blades (a bit less engagement in your Romboids), as well as your lower Transverse Abdominals (illustration 1c) and Pelvic Floor (illustration 1b). in this way your whole abdominal area from back, side to front is wrapped in a stabilizing squeeze which will anchor your now firm shoulder saddle and upper body activity into your lower torso and pelvic foun- dation. If you do so you will find your chest lowering a tad, allowing yourself to let go of the Thoracic spine extension described above.
Whereas these two versions of Chaturanga looks quiet different for the naked eye one simply grows out of the other. Strong attention should be given to 2b that the former pattern (#1) is fully founded in your body before proceeding to pattern #2. Because if it is not your chest will most likely ‘collapse’ in on itself (loosing the frontal support of Pectoralis action, illustration 2c & 2d) which would instantly drop us back into hanging in the Acromio Clavicular Ligaments again, upon which we have now obtained a tense body, making movement and asana difficult while pouring our weight into the ligaments we set out to protect!

As you can see this is not an easy task to take on and as a matter of fact one that few asana practitioners embody. It is difficult to wrap our heads around and difficult to find while practicing. But with a knowledgable teacher this information becomes a possible and kinesthetic experience. Yet, when I teach asana to beginners I rarely even comment on this as the complexity is high, the strength required to begin finding these patterns almost never there and the dedication to the practice yet not burning hot enough to want it. So Chaturanga is most often a focus for the seasoned practitioner who is injured or extremely eager, often approached later on in the development of a personal practice.

I hope this can be useful for your work with defining your Chaturanga.
Good luck and enjoy your practice!

DON’T MISS OUT!
Subscribe To Newsletter
Be the first to get latest updates and exclusive content straight to your email inbox.
Give it a try, you can unsubscribe anytime.

Powered by Convert Plus